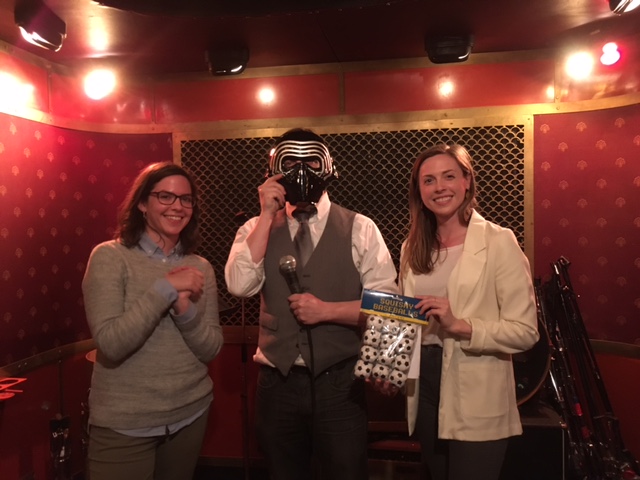 Another month, and another hotly contested battle in the Prose Bowl.  Batman is fighting Superman.  Cap is fighting Tony. Hills and Bernie are duking it out on everyone’s Facebook pages.  But nothing compares to the war of wits at Pete’s Candy Store.

We cut straight to the action, as Johanna jumped first into the fray, Breaking Bread with the audience with a story detailing your day in church.  (Johanna is the one who knocks.) Big Mike followed up with an exceedingly detailed recap of his attendance at a seminar.

The second half saw the battle turn feverish with Gina lamenting the loss of the world’s greatest couple portmanteau, followed by some general discussion by our panel about the relative pretentiousness of using the term ‘portmanteau.’ Bridget fought back against the tides of cat piss, with a stunning serving of craigslist passive-aggression.

In the wild whirling dusts whipped up in the scrum, our panel labored to work out who should stand tall as our finalists for the.  Long standing panelist, Jordan Zolan stared into the recesses of his own nail beds searching for guidance, whilst our artist in residence Christopher Green stroked his beard in lieu of comment.  Beside them, our guest judge, Miss Manhattan herself, Elyssa Goodman pondered her notes which had come out all Sanskrit in the fever of the melee. 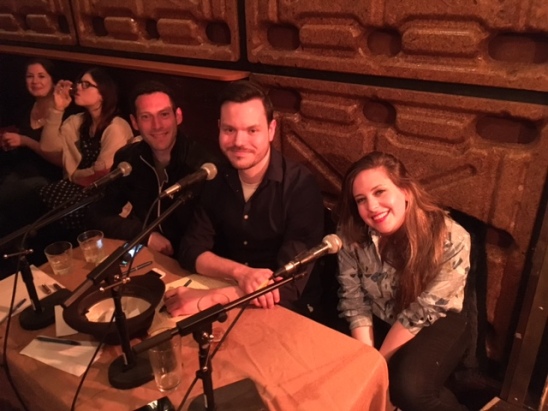 In the end, Bridget and Gina were chosen as our finalists, to the surprise of no one who looked at the top image on this post.  The lightning round echoed with the clash of equally well wielded words, that clanged and locked together.  (No really, both their short-short stories were really good, and seemed to interlock.)

The audience was split between them, and after bout after bout they came up evenly matched, and shared the prize for the evening.  Bridget took home some oddly marked “baseballs,” and Gina went home with the final piece to her Kylo Ren cosplay.

The battle done, we all took respite in whiskey.

Another great battle in the Prose Bowl guys!  Keep in mind, the next show is the SUPER PROSE BOWL.  If you haven’t gotten your ticket yet, ask yourself…what am I doing with my life?  Also, in a couple weeks you’ll hear the next edition of the ProseCast complete with an interview with last month’s guest judge Holland Cowger.

It’s an exciting time to be in the bowl, ladies and gents.  We’ll see you soon!!

You get an awkward and inaccurate fishing simulation.

It’s a big week, guys. We have a new mini-episode of the ProseCast up, and tomorrow is the next Prose Bowl!

Take a listen to the show, to get yourselves ready for tomorrow’s harrowing heat of harangues.

Also, don’t forget that the SUPER PROSE BOWL is coming up next month.  (Yes, the caps there is totally necessary.) Six Champions from Prose Bowls past will face off in the ultimate test of terse tales.

If you haven’t gotten your tickets yet, no problem.  You can pick yourself up a seat to the greatest show of mirth, right here.

Tickets for the SUPER PROSE BOWL!

Pick them up here!